Birthstone of the Month – Garnets 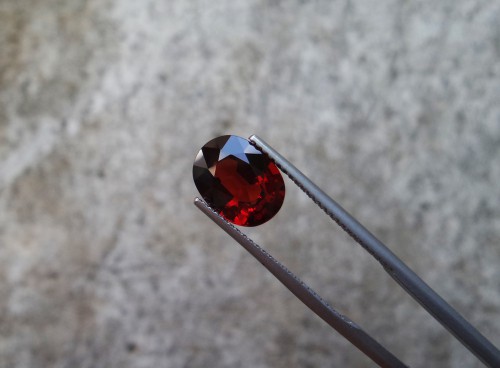 Derived from the 14th century Middle English word “Gernet”, meaning “dark red”, garnets are one of the most plentiful gemstones on the market. There are few types of gems that offer such a broad range of size, lustre and colour as a garnet, explaining why this mainstream gem has exploded in popularity over recent years.

Here’s everything you need to know about the birthstone of January, the garnet.

What Is A Garnet?

A garnet is a species of gemstone, comprised of a group of mineral species that virtually always occur in blends. As a result, the garnet family is one of the most complex of all of the world’s gems.

Garnets can be found as individual crystals or pebbles, and are most commonly found with reddish shades, but can appear in almost any colour. Therefore, although red is the most traditional colour of a garnet, some of the highest-value garnets are in shades of green or orange.

Garnets are the birthstones for those born in January, and also serve as the stone that celebrates the 2nd anniversary of marriage. Garnets are also believed to be one of the oldest birthstones and have been used and circulated for thousands of years.

The History of Garnets

As well as the above Middle English translation, the word ‘garnet’ is derived from the Latin word “Garanatus”, meaning “seedlike”, in reference to a pomegranate. Garnets were first used as a sacred stone by the Mayans, Aztecs and Native American Indians, and was also used for protection for travellers who were away from home.

During history, many women wore garnets because of the gem’s ancient connections with the feminine life force. They were extremely popular in Europe during both the 18th and 19th centuries, as well as in Victorian times. The garnet was also praised for its protective and curative powers and was said to be used for its perceived medicinal purposes as well as for its striking colour and appearance.

Today, garnets are worn not only ornamentally in jewellery pieces, but are also used in industrial markets, making up items from watch gears to sandpaper.

How Did Garnets Become the Birthstone for January?

Experts believe that the origin of monthly birthstones can be traced back as far as the Bible. In Exodus 28, Moses creates directions for making garments for Aaron, High Priest of the Hebrews. One such direction was that his breastplate should contain twelve precious gemstones, indicating Israel’s twelve tribes. These stones were later linked to the twelve signs of the zodiac, and eventually, to the twelve months of the calendar year.

Some call garnets the ‘gem of faith’, as legend suggests that those who wear garnets can bring peace, prosperity and good health to those they encounter. Therefore, this is the perfect gemstone for those with a January birthday who want to begin the New Year with a profound sense of peace, happiness and goodwill. The zodiac sign for the garnet gemstone is Aquarius, which also ties in well with the shared trait of creativity between the stone and those with this zodiac sign.

Almandine is the most widely used garnet type on the market and has a scarlet colour with brownish overtones. As such, this type is tied to the Earth, and is a stone of physical love and relationships, as well as psychic protection.

The Andradite garnet displays the elemental, Earth-like colours of green, olive, dark yellow and black. This stone is representative of safety, strength and self-empowerment. It is intended to dissolve negative feelings of isolation and can attract intimate encounters with others.

Commonly green but occasionally brown, the Grossular gem variety is intended to evoke hope, empowerment and nurture from Mother Nature. It is also a stone of prosperity, gratitude and service to others that is generally associated with the Heart Chakra.

A Pyrope is one of the most well-known types of garnets and is often described as ‘living fire’. Its colour ranges from rosy red to deep crimson, and is a stone of inspiration, vitality and charisma. It is often free of flaws and has an exquisite transparency.

Termed ‘the garnet of the sun’, a Spessartine’s shade ranges from yellow to an orange-ish red. This type of garnet is one of the rarer varieties and is reflective of creative energies.

The Tsavorite is a fairly new garnet variety and is a powerful green colour. First discovered in the 1970s, this variety is believed to increase wealth and bestow affluence when worn.

What Pieces Do Garnets Go Best With?

As far as jewellery goes, garnets are excellent for toned down, minimalist styles. Stud or delicate, dangle earrings are therefore great to hold the garnet gemstone. In the same vein, garnet pendants or light bracelets are a great way to add a subtle touch of colour.

There are some varieties of garnet, however, that suit statement jewellery pieces more. For example, a garnet cocktail or statement ring is a great statement piece, as is a garnet necklace.

It’s important to remember to clean your garnet jewellery frequently with warm soapy water and a soft brush. Rinse the stone well after washing it, and never steam clean the piece to keep it protected for longer.

Whether it’s a garnet necklace, pendant, earring, bracelet or engagement ring, look no further than the expert team at Perth’s Allgem Jewellers. Conveniently located in Hay Street Mall in the CBD, Allgem’s wide range of gemstone jewellery pieces, including a range of garnet-specific items, is sure to suit all design preferences. Contact our professional master jewellers or visit our showroom to take a look at our wide range of luxurious gemstone jewellery.

How to Buy Loose Opals Without Looking Clueless 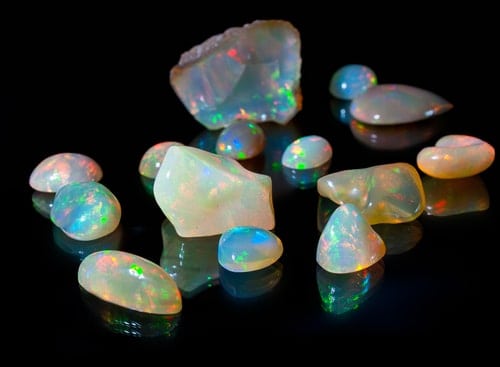 Australia’s opal mines are responsible for approximately 90% of the world’s opals. Defined by its shifting colours, semi-transparency and silica composition, the opal – or particularly, the Australian opal, came into being between 30 and 40 million years ago, when heavy weathering began to dissolve the silica stored in the holes of a rock.

Opals have so many patterns that is nearly impossible to find two opals that look the exact same. Distinct and attractive patterns such as harlequin, rolling flash, Chinese writing, ribbon and mosaic are extremely rare and considered collectors’ items.

The value of an opal is determined by its type, its predominant colours, the clarity of these colours, and the patterns in which the colours are displayed. Other factors can include the shapes by which it is cut, its body tone, its brilliance or its transparency.

There is no governing body to value and price the world’s opals. Instead, demand from the international market decides what buyers must pay to obtain these gems. Demand relates to customer enthusiasm and may be directly influenced by the world economy or global fashion trends.

As opals are of such a rare and high quality, their scarcity is increasing on a global scale. In a good quality opal, the spheres of silica are packed together in a regular pattern – which creates a three-dimensional appearance with bands, or flashes, of colour.

Other factors at play within an opal’s quality include its body tone, brilliance, the thickness of its colour bar, and any faults such as cracked or natural inclusions.

When choosing and comparing opals, be sure to select a colour that appeals to you. In your comparison, be aware that an opal is judged on its range of colour and colour composition – so the more colourful an opal, the more valuable it will be.

It is also important to look at as many different opal types as you can to decide on which type you like best. If it’s a solid opal you’re after, for example, this research will help you ascertain that a solid opal is durable but also quite expensive in comparison to a composite opal.

It is extremely important to have a jewellery inspection conducted before you purchase an opal. A professional jewellers’ opinion may affect the gem’s value, and may also provide valuable insight on its care requirements for maintenance in future.

Once you’re ready for purchase, be sure to obtain a certificate of authenticity. Reasons for doing so include insurance purposes, re-sale value and accountability of the seller.

Where to purchase opals in Perth

If you’re on the hunt for a precious opal in Perth, look no further than the team at Allgem Jewellers.  Allgem jeweller Alfie has extensive training and experience with precious gems and Australian opals, and has qualifications as a Registered Valuer, Gemmologist and Master Jeweller. Conveniently located in Hay Street Mall in the CBD, our services involve the valuation of custom jewellery, gemstones and more. Contact our professional master jewellers to book in for your next jewellery valuation.