Birthstone of the Month – Amethyst 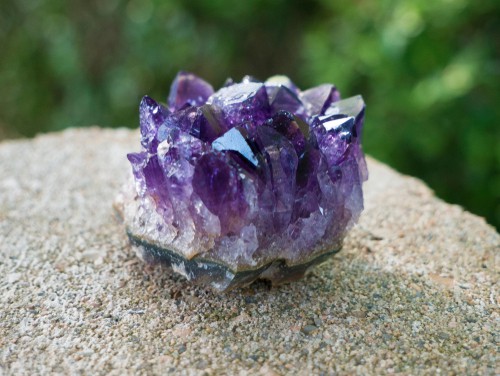 The word ‘amethyst’ has a Greek origin and refers to ‘sobriety’ – guiding its owner into a serious mindset. The amethyst stone not only has a rich historical background but is also a stunning piece of jewellery tied to the month of February in the birthstone calendar year.

Here’s a few key facts you’ll need to know before purchasing an amethyst or a piece of jewellery with an amethyst within it.

What Is an Amethyst?

Amethysts are members of the quartz family and are traditionally considered one of the most valuable gemstones among diamonds, rubies, emeralds and a few choice others. In terms of value, amethyst collectors search for depth of colour – including the possibility of red flashes if they are cut conventionally.

Value for amethysts depends almost entirely on colour. The ideal colour of an amethyst is called ‘Deep Siberian’ and is extremely rare, but there are also green quartz varieties that are called green amethysts. Light-coloured amethysts are enjoying a resurgence in popularity as of late, with the pinkish, lighter shades titled ‘Rose de France’.

Deposits of amethyst can still be found in the vicinities of Greece, Italy, North Africa, Brazil and the Middle East, and the origin of rich purple amethysts can be traced back to royalty, who wore them as a symbol of heightened status. Today, as is the case with other gemstone varieties, amethyst can be easily produced in laboratories.

The History of Amethyst Stones

In Greek mythology, amethyst was rock crystal dyed purple by the tears of Dionysus, the god of wine and merriment. As such, ancient Romans and Greeks used to wear the amethyst stone while making drinking vessels, as they believed the stone could prevent intoxication. Throughout the ages, amethysts have also been used as a symbol of royalty – with some even decorating the British Crown Jewels. The amethyst was also a personal favourite gem of Queen Catherine the Great of Russia.

Amethyst also holds religious connotations. During the Middle Ages, the amethyst stone represented piety and celibacy, was used to adorn crosses, and was also worn by members of the Catholic clergy during church services. It was also considered one of the Cardinal gems in the Old World, in that it was one of the five gemstones that was considered precious above all other gemstones – that is, until large deposits were located in Brazil. 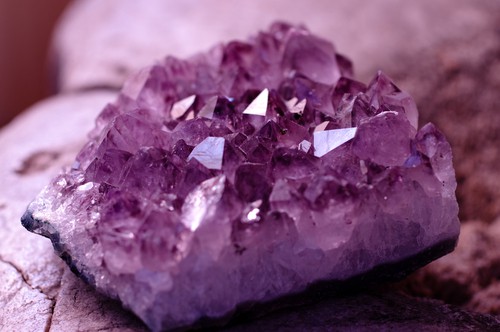 How Did Amethysts Become the Birthstone for February?

Aaron, also known as ‘Aaron the Priest’, was the brother of Moses. Aaron wore a special garment which had a crystal breast plate – for which Moses provided specific instructions regarding its design. There were twelve gemstones on the breastplate, one for each of the names of the sons of Israel. Despite some initial controversy, at the formation of the traditional calendar year, these twelve stones are today viewed as the definitive chart of astrological birthstones.

It is said that the amethyst is the stone of Saint Valentine, who was believed to wear an amethyst engraved with the figure of his assistant, Cupid, within it. This is believed to be a reason for the amethyst’s placement as February’s birthstone, as Valentine’s Day is traditionally celebrated in the month of February.

Amethyst stones appear in a variety of shapes and shades – ranging from light purple tints to gems that are nearly black. The most well-known types of amethyst are purple, pink, mossy, ametrine, cape and prasiolite.

Pink stones are considered the least valuable as they feature an extremely light and indistinct lavender hue. Mossy stones, on the other hand, can appear in both light and dark hues and have veins that are visible throughout the bead.

Cape amethyst stones feature hints of milky white quartz, whereas ametrine is one of the rarest gemstones and contains a mixture of yellow and purple hues in the single crystal – a feat that rarely occurs in nature.

Lastly, prasiolite quartz features a yellow-green hue with slight tinges of purple throughout.

What Jewellery Pieces Do Amethysts Go Best With?

The amethyst gem is durable enough for use in a variety of jewellery pieces, such as rings, earrings, bracelets, pendants and other types of jewellery. Plus, as there are enormous deposits of amethyst across the world, there is enough material to keep the gem’s price point low enough that most people can afford to purchase jewellery that contains it.

Amethyst jewellery has been consistently popular over time – particularly due to its elegant, sophisticated look. Generally, set in 925 sterling silver, gold or rose gold, there are plenty of options when it comes to purchasing amethyst jewellery.

Amethyst pendant jewellery is a great way to display the depth and complexity of the amethyst stone. Craftsmanship is key when it comes to amethyst pendants, so it pays to be picky when making your pendant selection to ensure you find the perfect cut, length and general display.

Studs, drop earrings, and threader earrings are the most popular types of amethyst jewellery settings for earrings. And lastly, when it comes to rings, an amethyst is extremely effective alone as a statement stud. If searching for the perfect amethyst ring, don’t be afraid to go simple and let the amethyst stone shine through as the hero of the piece.

Whether it’s an amethyst necklace, pendant, earring, bracelet or engagement ring, look no further than the expert team at Perth’s Allgem Jewellers. Conveniently located in Hay Street Mall in the CBD, Allgem’s wide range of gemstone jewellery pieces, including a range of amethyst pieces, is sure to suit all design preferences. Contact our professional master jewellers or visit our showroom to take a look at our wide range of luxurious gemstone jewellery.