Birthstone of the Month – Emerald 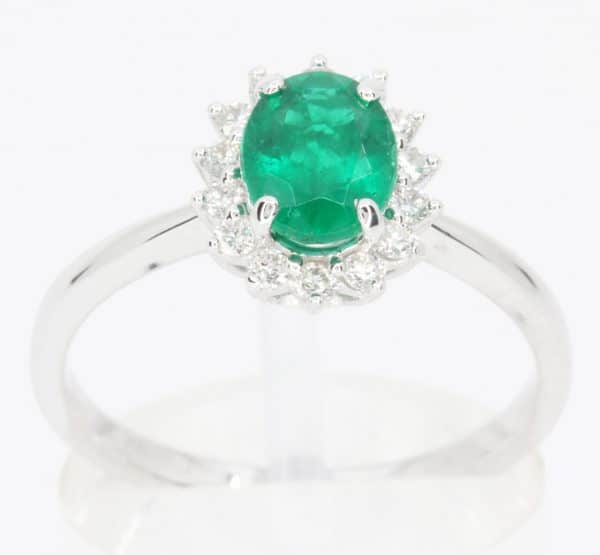 According to Indian mythology, the name emerald was first translated from Sanskrit as “marakata”, meaning “the green of growing things”. Emeralds traditionally signify hope, prosperity, growth and peace, and are classified as ‘Type III’ gemstones with natural flaws that are often praised for their uniqueness and beauty.

Here’s a round-up of the history, qualities, and maintenance required for May’s gemstone, the emerald.

What is an Emerald?

The emerald gemstone belongs to the beryl family. Beryl is a mineral that contains a lot of beryllium, which is an extremely rare metal which mainly occurs in granite and metamorphic rocks. Another variety of gem beryl is the aquamarine gemstone.

Though emeralds are not as hard as diamonds, they last a long time. They range in colour from light to dark green – a shade that is said to represent new life and the promise of springtime. Occasionally, trace amounts of iron can tint an emerald bluish or yellowish, depending on its oxidation state.

Emeralds are predominantly found in Brazil, Colombia, Afghanistan and Zambia. There are also abundant emerald deposits in Australia, Pakistan and Russia – but the source of the world’s finest emeralds are in Colombia. They are found in metamorphic, igneous and sedimentary rocks.

The most famous mining district in Colombia is Muzo. With a hot, humid climate with tons of rainfall, emerald crystals are plentiful in calcite deposits in shale. Within this area, crystals are also found in veins containing albite, quartz and pyrite.

The History of Emeralds

The history of emeralds spans thousands of years. They were sold in ancient markets in Europe and Asia up to 6,000 years ago, and even Aristotle mentioned the emerald in his writings – noting that the stone can improve an individual’s status. In Greek mythology, Hermes gifted a giant emerald for Aphrodite, and in the Hebrew tradition, an emerald was one of four precious stones given to Solomon.

Emeralds are also known for their spiritual properties, and were praised by the Chaldeans for their perceived divine nature. It was also stated that Roman emperor Nero viewed gladiator fights through the lens of an emerald as he believed it soothed him.

Over the years, emeralds have featured in some of the world’s most iconic pieces of jewellery. The “Crown of the Andes” is one, and the Chalk Emerald necklace worn by the Maharani of Baroda is another. Napoleon’s gift to his daughter upon her marriage to the Grand Duke of Baden was an emerald and diamond parure jewellery set.

Royal families across the globe were also keen adopters of the emerald into their pieces of jewellery. Cleopatra was famous for her love of the emerald, and the precious stone was also a part of crown jewels in Russia, Iran and India. Alongside royals, celebrities were also a fan of this precious stone; Elizabeth Taylor notably had a large collection of emerald brooches and necklaces.

How Did Emeralds Become the Birthstone for May?

If you were born in May, you’re lucky enough not only to inherit the emerald as your birthstone, but to share this precious gemstone with some formidable women in history, including Queen Victoria, who received both a symbolic snake emerald wedding ring, and a tiara embedded with emeralds – which is now on display at Kensington Palace. Both were gifted to her by Prince Albert.

As far as the emerald’s significance to the month of May, experts believe the concept of monthly birthstones can be traced back to Biblical times. In Exodus 28, Moses directs a breastplate to be created for Aaron, High Priest of the Hebrews. The breastplate would contain twelve precious gemstones, indicating Israel’s twelve tribes. Later, these stones were linked to the twelve zodiac signs, and eventually to the months of the calendar year.

What Jewellery Pieces Do Emeralds Go Best With?

When it comes to jewellery, diamonds are cut in a fashion that is known as an ‘emerald cut’. This cut was originally developed to optimise the gemstones’ striking green colour, rather than their brilliance.

Emeralds are suitable stones for all types of jewellery, but are particularly popular when set in rings, necklaces, bracelets and earrings. However, as emeralds are quite fragile, they aren’t recommended for setting within engagement rings.

As emeralds are such precious gemstones, it’s important to clean them at least three times a week with a soft cloth. Emeralds can’t withstand chemical cleaning, so it’s best to be proactive with cleaning instead of waiting for dirt build-up to appear.

It’s also important to avoid exposing your emerald to extreme temperatures. Even continuous exposure to sunlight can be damaging, so take care when wearing and cleaning jewellery pieces with emeralds.

When it comes to cleaning emerald rings, it’s a good idea to soak them in mildly warm water with a very mild detergent to revive the sparkle of your ring. Using a soft brush such as a toothbrush is also a good idea to reach the ring’s crevices.