Birthstone of the Month – Topaz & Citrine 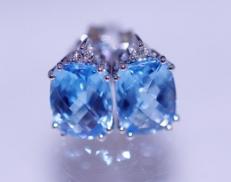 Though they are from completely different mineral families, topaz and citrine gemstones are not only often mistaken for each other, but they are both the birthstones for the month of November.

While the citrine ranges from pale yellow to brownish in hue, topaz gemstones are traditionally colourless and can be tinted by impurities to reflect these typical citrine colours. Brazil is a key global source of both of these gemstones, and common jewellery settings for these November birthstones include pendants, necklaces, rings and men’s cufflinks.

Read on to learn more about the diverse and stunning topaz and citrine gemstones.

What is a topaz?

The availability, stunning colours and solid hardness of the topaz gemstone makes it one of the most popular stones on the global market. Pure topaz gemstones are colourless, but can be tinted by impurities to incorporate any colour of the rainbow – the most valuable being pink, blue and honey-yellow. The very first colourless topaz was discovered in 1740 in Brazil.

The state of Minas Gerais in Brazil is one of the world’s most important sources for high-quality topaz – in fact, it’s been mined there for over two centuries. When it comes to other colours and varieties, sections of north-western Pakistan are renowned for pink topaz production, and a few historic Russian localities, Sri Lanka, Mexico and Namibia, (to name a few places), are also noted at topaz hotspots.

History of the topaz

Many believe the word ‘topaz’ is derived from the Sanskrit word ‘tapas’, meaning ‘fire’ – however, others associate the gemstone’s name with a small island in the Red Sea named Topazios. Though the island never produced topaz, it was renowned for its plentiful peridot sources, which were often confused with topazes.

The ancient Greeks believed topaz would give them strength, whereas Europeans within the Renaissance period thought topaz could break magic spells. Furthermore, popular ancient Roman mythology believed that if topaz was held close to poisoned food or drink, it would change colour to signal danger to the consumer.

What are the different varieties of topaz?

One of the most recognisable varieties of topaz is the Imperial topaz. Orangeish-yellow in hue, this is the most valuable form of topaz on the market. Other varieties of topaz gemstones have been coined by jewellery dealers, and include mystic, sherry, white, Azotic, London blue and rutilated topazes.

What is a citrine?

The citrine gemstone can be defined as a pale yellow quartz found within the Earth’s crust (similar to amethysts). It ranks at a 7 on the hardness scale, and in its pure form, it’s transparent, and its colour is caused by chemical impurities or faint traces of iron – often appearing from yellow to reddish-orange in hue.

Bolivia, Madagascar, Spain and Uruguay are some of the best sources in the world for citrine gemstones, but most of the globe’s citrine production comes from Brazil. However, most citrines produced in Brazil are likely heat-treated amethysts, appearing orange, reddish and sherry coloured.

Believed to be derived from the French word for ‘lemon’ (‘citron’), the citrine gemstone has been popular since ancient times; in part, thanks to its similarities to the other November birthstone, topaz. It was notably used for stunning jewellery by the ancient Romans, and held great significance in prized pieces in the Art Deco period between the two World Wars. Many notable figures and celebrities have worn citrine jewellery throughout history, including Joan Crawford, Greta Garbo and Kate Middleton.

One of the most notable periods in history for the citrine gemstone was in the mid-18th century, when mineralogists realised that smoky quartz and amethysts could be treated to produce honey hues of citrine; thus making the gemstone more abundant and affordable on a global scale.

What are the different varieties of citrine?

One of the most distinguishable citrine varieties on the market is the lemon quartz. Light to dark yellow in colour, this citrine lacks orange or brown tints, and is very popular on the global jewellery market. Other citrine varieties include yellow, golden, madeira and palmeria citrines.

How did topazes and citrines become the birthstones for November?

Scholars can trace the original calendar of gemstones, including the topaz and citrine, back to the Breastplate of Aaron as described in the Bible’s book of Exodus. The Breastplate was adorned with gemstones that represented the tribes of Israel. Based on this model, the modern birthstone list was created in 1912, and has since been defined by the National Association of Jewellers of the United States.

As well as serving as one of the November birthstones, blue topazes are often gifted for fourth wedding anniversaries, and citrine gemstones are gifted for 13-year anniversaries.

What jewellery pieces do topazes and citrines go best with?

The durability and popularity of the topaz gemstone make it a popular choice for many jewellery pieces, including rings, necklaces, earrings, pendants and bracelets. Citrines, on the other hand, are most commonly used in pendants or as the centrepiece for rings or earrings. Often cut into oval or rectangular shapes, lesser-quality citrines are often combined with white quartz to make beads for bracelets or necklaces. For men, citrines are also used in cufflinks and male rings.

Whether it’s a pair of topaz earrings or a citrine pendant, look no further than the expert team at Perth’s Allgem Jewellers for your next piece of jewellery. Conveniently located in Hay Street Mall in the Perth CBD, Allgem’s wide range of gemstone jewellery pieces, including a range of stunning sapphire jewellery pieces, is sure to suit all design preferences. Contact our professional master jewellers or visit our showroom to take a look at our wide range of luxurious gemstone jewellery.