Birthstone of the Month – Sapphire 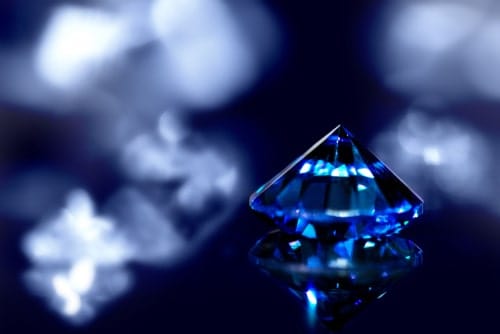 Derived from the Greek word ‘sappheiros’, referring to the island of Sappherine in the Arabian sea (where sapphires were discovered in ancient Grecian times), the sapphire is a gemstone that has been cherished across the globe for thousands of years.

A popular choice with royalty, sapphires are one of the most sought-after gemstones when it comes to jewellery settings. So if you’re considering including a sapphire in your next jewellery piece, read on for all you’ll need to know about this unique and beautiful gemstone.

What Is A Sapphire?

Sapphires typically appear as blue gemstones, but may also appear in other natural tints, including colourless, yellow, orange, green and brown – which are called ‘fancy sapphires’.

Sapphires are quite tough gemstones, ranking a 9 on the Mohs scale. They are often treated by heat to improve colour or clarity, which leaves permanent results.

The biggest source of sapphires in the world is in Australia – particularly in Queensland and New South Wales. Australian sapphires are typically dark blue stones which have a slightly inky appearance.

One of the world’s most famous sapphires in recent years is the sapphire engagement ring first worn by Princess Diana, and now worn by Kate Middleton, the Duchess of Cambridge. Prior to this, Queen Victoria’s Imperial State Crown of 1838 was another setting for a famous Royal sapphire; that now resides in the British Crown Jewels in the Tower of London.

The first sapphires were discovered in Kashmir in 1881, when a Himalayan landslide exposed a large pocket of smooth blue crystals. As more of these crystals were discovered, Kashmir’s reputation as one of the world’s most fruitful locations for sapphires was cemented.

Another area where sapphires are commonly found is in the Mogok area of Myanmar. In this region, sapphires are typically found along with ruby deposits. This is where the ‘Burmese’ sapphire was discovered; characterised by its rich and intense blue hue.

Today, Sri Lanka is one of the most renowned sources of sapphire gemstones. The island’s sapphires are a little whiter and appear milky, but are commonly treated by heat to become a rich, blue colour. Besides these three locations, sapphires are also found in Thailand, Cambodia and Bangkok.

There is an array of legends associated with the sapphire gemstone. The elite of ancient Rome and Greece believed a sapphire would protect its owner from harm, whereas religious leaders of the Middle Ages wore sapphires as they were believed to symbolise heaven. The French in the 13th century believed the sapphire could transform stupidity to wisdom.

What Are The Other Varieties Of Sapphires?

As mentioned above, there are plenty of colour varieties when it comes to sapphires. Pink, yellow and white sapphires are all popular choices for jewellery pieces, but there are more options to choose from if you’re after more than a different colour for your unique sapphire gemstone.

The star sapphire is black and has an incredibly unique earthy tone to it. Their special feature is dubbed ‘asterism’ (which refers to exhibiting a star-like reflection), and lends an added element of mysticism that is extremely popular and unique.

Another variety is the cabochon sapphire. Utilising the oldest method for cutting crystals, cabochon crystals have a timeless appeal and a raw, earthy beauty. Cabochon sapphires are most often blue, and don’t give any flashes of light reflection or ‘sparkle’. These incredibly pure gems are intended to be viewed and appreciated for their even distribution of rich, deep blue colour. These come in a few different shapes, including oval, round, cushion and the rare sugarloaf variety. 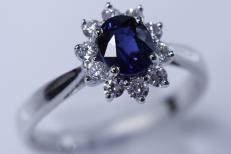 How Did Sapphires Become The Birthstones For September?

Scholars can trace the original calendar of gemstones back to the Breastplate of Aaron as described in the Bible’s book of Exodus. The Breastplate was adorned with twelve gemstones that represented the tribes of Israel at the time – and based on this model, the modern birthstone list was created in 1912. It has since been defined by the National Association of Jewellers from the United States, and thus the sapphire’s association as the birthstone for September was set in stone.

As well as being the birthstone for September, sapphire is also gifted to commemorate 5th and 45th wedding anniversaries.

What Jewellery Pieces Does This September Birthstone Go Best With?

Because it’s a relatively tough gemstone, sapphire rings are popular jewellery types and are durable enough to suit daily wear. Engagement rings, in particular, are popular settings for sapphire gemstones.

Other jewellery types that are popular for sapphire settings are earrings, pendants, bracelets and necklaces.

How To Keep Your Sapphire Jewellery In Good Condition

As sapphires are often treated by heat to improve colour or clarity, it’s important to be aware of how your sapphire gemstone was treated and by what method. Fractured sapphires can be damaged by the mildest of substances, such as lemon juice, so discussing your sapphire’s treatment method is a great way to understand how much care you’ll need to give it – and whether daily wear is suitable.

Whether it’s a sapphire ring, pair of earrings or pendant, look no further than the expert team at Perth’s Allgem Jewellers. Conveniently located in Hay Street Mall in the CBD, Allgem’s wide range of gemstone jewellery pieces, including a range of stunning sapphire jewellery pieces, is sure to suit all design preferences. Contact our professional master jewellers or visit our showroom to take a look at our wide range of luxurious gemstone jewellery.