Birthstone of the Month – Peridot 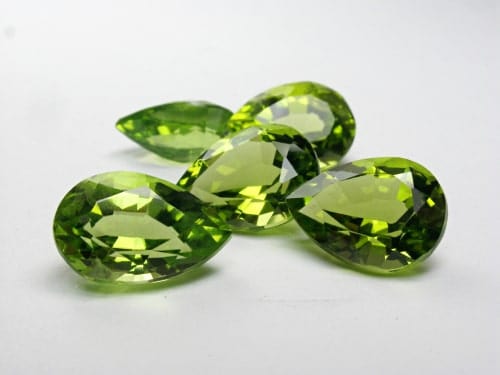 Generally, a light green colour, the peridot is a unique birthstone known for its formation under extreme conditions in either the Earth’s mantle or in meteorites. It’s known as the ‘evening emerald’ because its sparkling green hue looks striking at any time of day.

Most of the world’s peridot supply comes from the San Carlos Reservation in Arizona. If you want to learn more about these sparkling green gems, read on for information about the peridot’s history, types and its association with the birth month of August.

What Is A Peridot?

A peridot’s green colour is dependent on the iron contents within its structure – and in fact, it’s one of few gemstones that forms only in one colour: green. Most stones are more of a yellowish-green, and the finest hue is a pure green without any hints of yellow or brown tints.

The peridot is one of two gems (the other is a diamond) that is not formed in the Earth’s crust, rather in molten rock in the upper mantle that is brought to the surface by earthquakes or volcanoes.

While the majority of peridots are found within the Earth (as mentioned above), it is also a possibility for a peridot to arrive to Earth via meteorite. Dubbed a ‘pallasitic peridot’, the most common occurrence of this is traced to the Indonesian Jeppara meteorite, but is also prevalent in the Brenham, Fukang and Imilac meteorites.

The largest peridot ever found weighs 319 carats and is displayed at the Smithsonian Institution in Washington DC. In popular culture, you’ll often find peridot gems worn by British royals, including the Duchess of Cambridge, Kate, and the Duchess of Sussex, Meagan.

The first existence of peridot was recorded by Pliny the Edler (23-79 AD) on a small island off the coast of Egypt. Peridots were popular amongst the Egyptian Pharaohs, and today, the peridot is the national gem of Egypt. It’s even believed that some of Cleopatra’s famous emeralds were actually peridots. Ancient Egyptians have long prized the peridot for its protective powers and perceived gifts of inner radiance, growth and spiritual purpose.

Myanmar is another rich source of peridots. The northern slope of mountainous region Kyaukpon showcases loose peridot crystals in crevices. These specific peridots are renowned for their deep colour and sublime transparency.

Peridots are also connected to Hawaiian culture, as the gems are thought to be the tears of volcano goddess Pele.

In medieval Europe, the peridot was used as a protector; shielding the owner from evil spirits. It appeared in priests’ jewellery, and later in chalices and among churches in medieval Europe.

What Are the Different Varieties of The Peridot Gemstone?

Other common varieties of the peridot gemstone are chrysolites and olivines. Chrysolite refers to peridots that are light to medium yellow-greenish in hue, and olivine refers to darker yellow-green to brownish-green stones.

How Did Peridots Become the Birthstones for August?

There are actually three birthstones associated with the month of August: peridot, spinel and sardonyx. The peridot has been the birthstone for August since 1900, however, the tradition of birthstone selection harkens back to the Breastplate of Aaron as outlined in the Bible’s book of Exodus. The Breastplate was adorned with twelve gemstones that represented the tribes of Israel at the time – and based on this model, the modern birthstone list was created. It has since been defined by the National Association of Jewellers from the United States; affirming the peridot’s assignment to the birth month of August.

As well as being ascribed as one of August’s birthstones, peridot is the gem gifted to celebrate a 16th wedding anniversary. 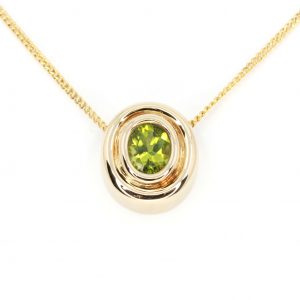 What Jewellery Pieces Does This August Birthstones Go Best With?

Peridot gems are cut in a wide variety of shapes, so they are an extremely versatile gem to work with when it comes to jewellery setting.

Peridot gems are particularly popular settings for rings, earrings, bracelets and pendants.  Peridot gemstones have been used in jewellery for centuries as they are extremely eye-catching and easy to distinguish because of its vibrant green colour. Peridots are extremely versatile, and they look stunning against any metal. For a classic, traditional look, rose gold or yellow gold are great options. If you’d prefer an edgier style, silver-coloured settings are the way to go.

Peridot rings are an extremely popular option when it comes to selecting peridot jewellery. A small peridot stone in a delicate ring setting is a stunning accompaniment to any outfit – or if you’d rather make more of a statement, a peridot cocktail ring is particularly striking. Peridot engagement rings are another great option – just remember that peridot has a very distinct colour, so your ring will be a clear stand-out and might not match colours of other jewellery or clothing pieces.

Peridots can be cut into round, princess, oval, emerald, radiant, cushion, heart and marquise styles. It can be a tricky gemstone to cut because it is prone to cracking, so be sure to select an expert jeweller to cut your peridot for you.

How To Keep Your Peridot Jewellery In Good Condition

Peridots are a great gemstone for daily wear, but it’s essential to take good care of them to maintain lustre and polish.

Whether it’s a peridot ring, pair of earrings or pendant, look no further than the expert team at Perth’s Allgem Jewellers. Conveniently located in Hay Street Mall in the CBD, Allgem’s wide range of gemstone jewellery pieces, including a range of stunning peridot pieces, is sure to suit all design preferences. Contact our professional master jewellers or visit our showroom to take a look at our wide range of luxurious gemstone jewellery.